…living the dream while workcamping across the country

Our month-long Baja adventure has ended and we are back in the USA! However, there is just so much more I need to share. In thinking back over the trip, I realized the total experience taught me many things – some of which I think I knew but needed to be reminded, and others were new realizations. For example…

Lesson #1 – My eight years of Spanish were well worth it – almost! It amazed me how much basic vocabulary came back to me – either to speak it or to read and comprehend. The Mexicans are very patient, and with simple words, hand motions, and even pictures, communication was not an issue. It was truly a give and take connection. Natives smiled and were proud of their English and the same went for Bill and I with our Spanish. His favorite words and phases were “el bano, gracias, and la cuenta?” as you always had to request the check – they never wanted to rush you! Only on our final day did I witness an American woman on the verge of hysteria when a Mexican clerk was having difficulty assisting her – I wanted to assist her with a quick smack to the face! 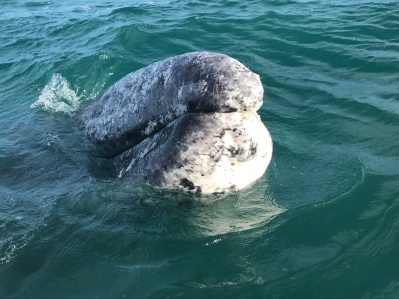 Lesson #2 – I could now ace the Jeopardy category – “Gray Whales!”  Our whale watching experience was truly the highlight of the month, and with regard to my blog, it’s another case where the pictures speak louder than words. There were 9 of us on a small Mexican pango boat that ventured out into the lagoon called “Ojo de Liebre” or Eye of the Jack Rabbit, where literally hundreds of gray whales live after their annual migration from the Oregon coast. 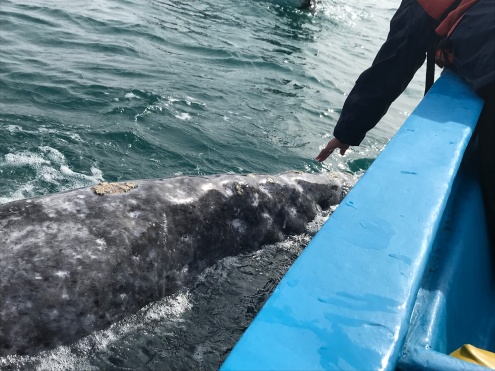 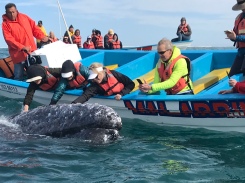 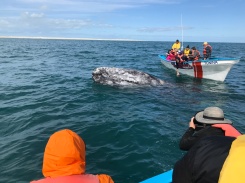 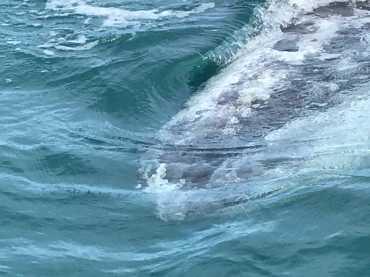 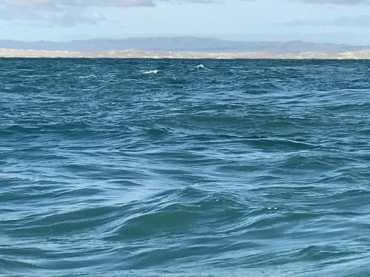 A gray whale weighs approximately a ton at birth and grows to an average of 40 feet long (the length of our motorhome!), weighing up to 45 tons. I have never in my life seen anything like this, as the whales very calmly approach the boat and seemingly yearn to be petted. We spent close to an hour witnessing a mother and baby frolicking, estimating the baby to be only a week or so old because it had absolutely no barnacles on it yet. The mom and babe would continually roll over playfully and then at times the baby would ride on top of the mother. Just look at these magnificent photos – snapped by me, an amateur at best! The whales breached, spy hopped, and showed their tale flukes, signaling a deep dive! 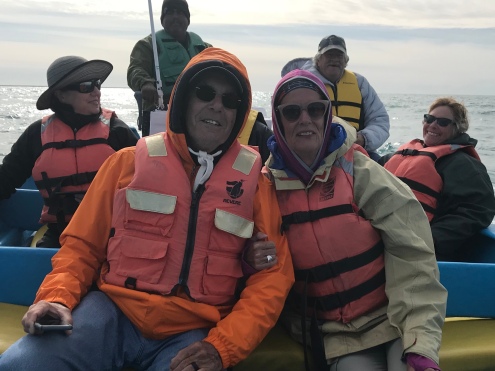 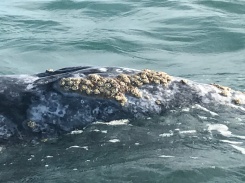 Also, interesting to note is the fact that in Guerrero Negro, where our whaling excursion took place, there exists one of the largest open salt mines in the world. Providing employment for hundreds of people, the town developed around the salt mine. A friendly sea lion greeted us as we passed by one of the salt barges! 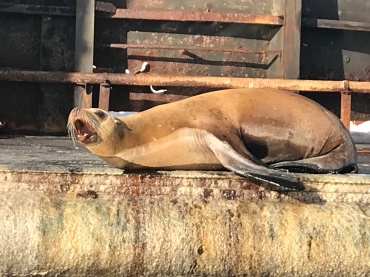 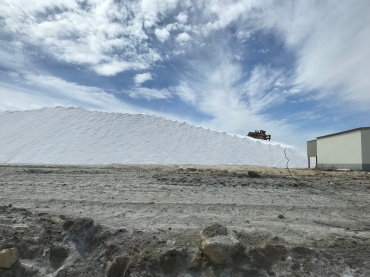 Following our whale watch we stopped at what is known to be the best fish taco stand in all of Baja! If the number of people at the site is any indication – or the deliciousness of the tacos – Tacos El Muelle is a definite must on the Baja adventure! 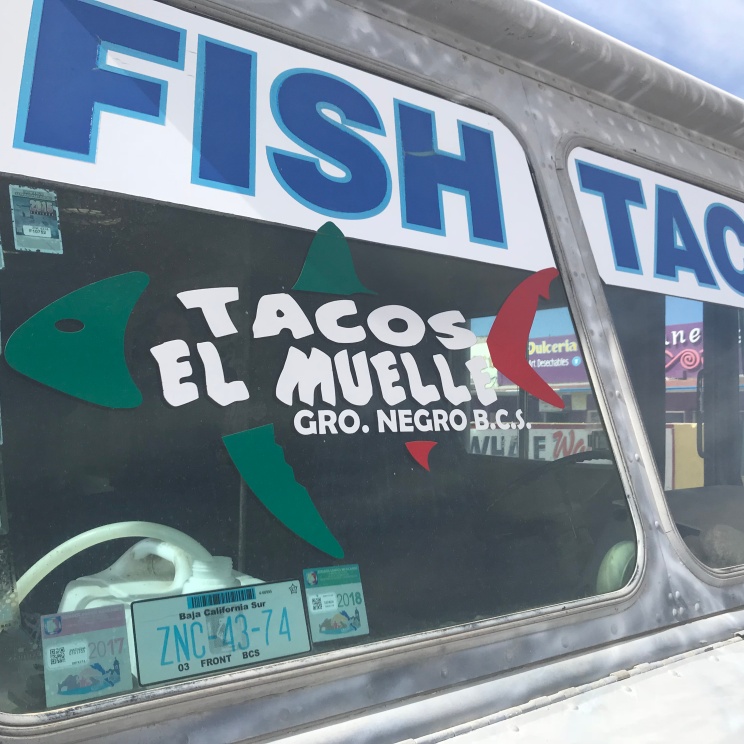 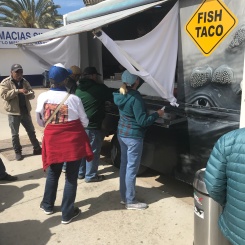 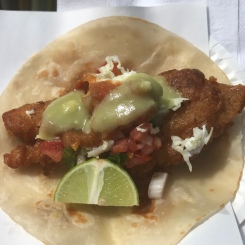 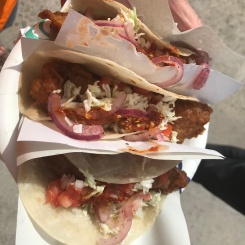 Lesson #3 – There are a great number of Americans doing wonderful things for children in the Baja. Several “gringo” communities as they are called, or expatriate American neighborhoods, such as Posada Concepcion and Oasis, have taken a special interest in the Mexican children’s education. Most Mexican children only have a 6th grade education and if they do go on, they must pay to go to high school. The two communities I mentioned have scholarship programs whereby they sponsor specific children by buying them school uniforms, shoes, which are a very big concern in Baja, and pay their tuition. The gentleman who owns the cottage Bill and I stayed in near Mulege shared a success story of a young girl whose parents owned a local restaurant who, through such a sponsorship by Americans went on to become a neurosurgeon!

Lesson #4 – Never take indoor plumbing, heat, or hot water – or even water in general – for granted! 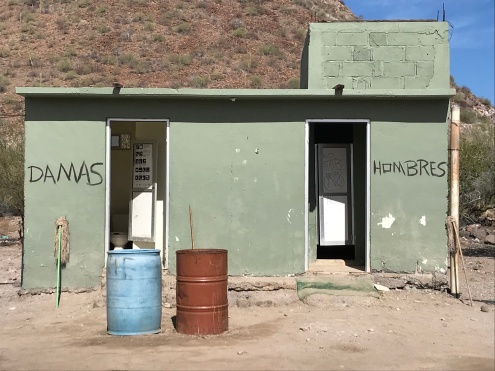 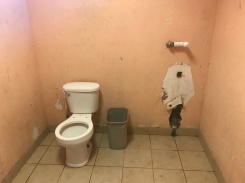 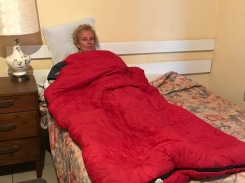 Lesson #5 – Political and philosophical differences seem to dissolve as strangers spend a month living together and experiencing new frontiers! Our caravan consisted of three couples from California, two couples and a single woman from Colorado, a couple from New Mexico, a couple from Canada, another originally from Oklahoma and Bill and I – who you’d think were from another planet when we shared that we were from New Jersey! Think a minute of all the differing viewpoints that might have emerged in such a diverse group! I really think what happened was that we subtly realized that politics was off limits while differing philosophies made our interactions all the more interesting!

Lesson #6 – Overall, the Mexican people that we met or observed have a very strong work ethic. I truly believe many Americans could take a lesson from our friends south of the border. For example, in the town of Loreto, where Bill and I spent 8 days, every morning when we walked the malecon, or boardwalk, there were at least six or seven men and women sweeping the cement with crude brooms and homemade dust pans or replacing pavers on the road by hand. A most interesting encounter occurred one evening when Jose, a local truck driver, prepared an absolutely magnificent clam stew over an open fire for us – homemade tortillas, clams, tomatoes, onions, cilantro, peppers, spices, and more! It was quite the production, but even more enthralling was Jose himself. He has a wife and two young children and makes $10/day driving a truck. He had just returned from a 36-hour trip, yet couldn’t have been more pleasant. To him, family is the most important thing in the world and that’s where his life emphasis is. Needless to say, we tipped him extremely well, for which he was tremendously grateful. 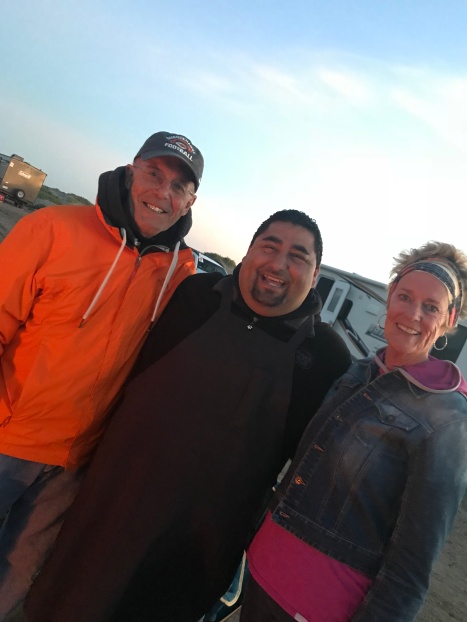 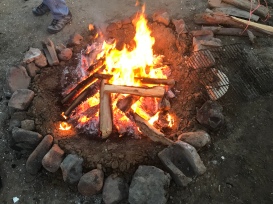 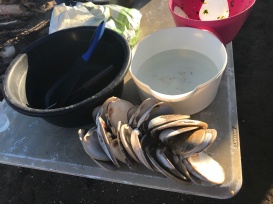 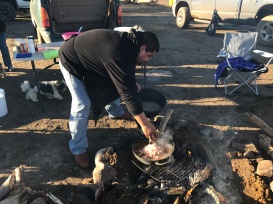 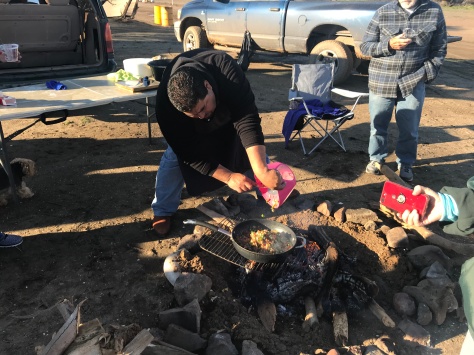 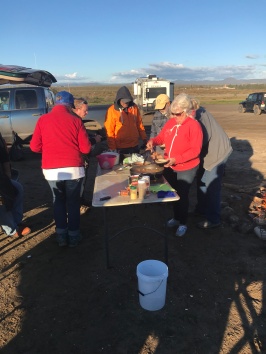 Lesson #7 – The earth is an incredible creation. God’s grandeur cannot be denied. It was amazing on our return trip, after only a month, how the land  had transformed. Wildflowers were blooming and abundant, and many varieties of cacti were in bloom as well. 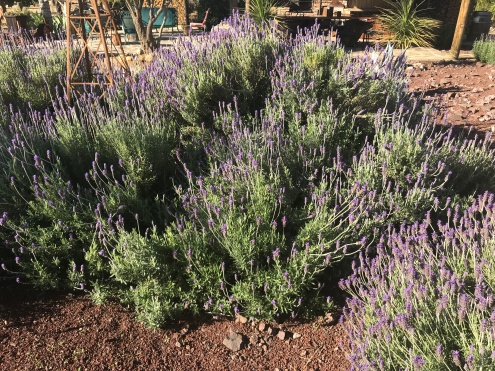 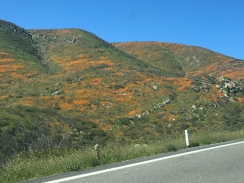 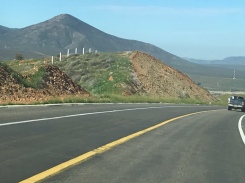 Leeson #8 – Wine is a wonderful thing! Watch for my next and final blog of our Baja adventure as I share two of the most unique winery experiences ever! Until then …

Stay Calm and Travel On…

One thought on “Lessons Learned From the Baja!”